Today, around the time this post is scheduled to go up, I will be getting ready to leave for Minnesota with my sister and her three lovely daughters. We’re driving up to MN from Oklahoma with three girls (almost) seven and under, so we’re taking two days to make the trip. We’re making the trip because my brother and his fiance live there and on the 6th, they’re getting married! We’re going early to help with things and just because we like them and we can!

Sno Cone wants to go with me!

Why should you care? Well, there’s no reason, really. BUT I do have at least one post scheduled (hopefully at least two!) and while I know I’ll have internet access, I’m not sure how busy I will be. So if you comment, I might not reply as quickly or it might sit in moderation longer. Plus, I won’t be around as much to comment on posts throughout the week, but I will make time to catch up when I get back next week! 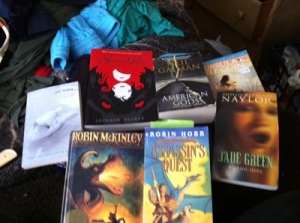 And of course I’m taking books with me! These were books I wanted to choose from. I wanted to narrow it down to four but I ended up with five. Oops.

And of course I’ll have my trusty eReader with me! There are a few unread books on it but right now I’m excited about:

Shiloh by Helena Sorenson – A book I received for review that I’m enjoying so far!

The River of No Return by Bee Ridgway – It sounds so great!

I also know there are some great eBook sales going on and I happen to have a gift card to both Barnes & Noble and Amazon! I have a Google Nexus so I have both apps! Are there any really great books you think I should check out? Are you buying any?

Also, if anyone is doing anything fun  or bookish this week and they just want to tell someone about it, you can tell me! I’ll probably read the comments on the drive or when we stop for the night and I’ll try to reply! I think that’s all I’ve got for now! Have a great week and 4th (if you’re American), reader friends!

Oh and have a bonus cat pic! 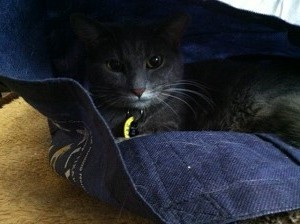 Comments are greatly appreciated and I try to reply to each one! I'm no longer accepting awards, but I appreciate the thought! Cancel reply

I'm Katy! I like to share my opinions about books, sometimes loudly. If you are wondering about my url it's from Tess of the d'Urbervilles!

*blog design under construction and blog posts slow at the moment*