To Keep or Not

To Keep or Not: Jade Green and Calling the Swan

When I moved a couple of years ago, I was’t very organized. I have boxes of books I haven’t been able to part with yet. But now I’m trying to get rid of things I don’t need and grow out of my pack rat ways. So, I’m going to reread some of the books that were boxed and decide if I should keep them or not! 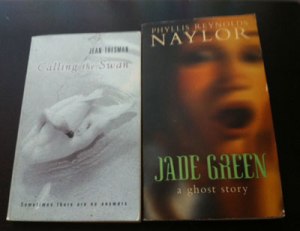 Orphaned fifteen-year-old Judith Sparrow brings two secrets to her uncle’s house in South Carolina: one, that her grief-stricken mother died in a madhouse, the other that she has disobeyed the only condition to living in her uncle’s home — nothing green is allowed in the house.

Judith can’t bear to part with the photograph of her mother in its lovely green silk frame. Surely this one small defiance will not jeopardize the happiness she finds in South Carolina — with a family at last, and new friends, especially Zeke Carey, the miller’s son.

But Uncle Geoffrey’s house holds a secret of its own. And Judith’s small picture frame, hidden away at the bottom of her trunk, unleashes a powerful force that seems determined to bring that secret into the open. Or is Judith simply following her mother down the path toward madness?

What I remembered before I reread: I didn’t actually remember anything about the story from the summary. I couldn’t remember if I had ever read it. Now, I’m not sure if the story felt really familiar or if it was reminiscent of something else OR if it was just that predictable.

Reread thoughts: Again, I’m not sure if I had read this before, but it was predictable. I’m pretty sure most people that have read a lot or are familiar with stories would be able to predict what was happening from really early on. There wasn’t any turn of the story I was surprised about. However, this book is written for a younger audience and some readers might not have the experience to see things coming. And you learn how to predict things by reading, so this might be a good book to teach that type of thing.

I’m not completely sure what age group this book is going for. There are a few romantic moments and other stuff that make me think it should be around middle school. Maybe the creepy factor, too.

None of the characters are the sort that stay with you after you finish the book. They’re all pretty simple and play their parts well. Some parts might be a little spooky, but once it gets into actual “ghost” territory it just gets kind of weird. The ending is ridiculous and easy but I didn’t find myself wanting anything more from the book. It was what it was.

There was nothing about Jade Green that made me want to keep it. I kept thinking “Well, maybe a younger reader would enjoy it.” I think younger readers that struggle with reading can sometimes benefit from quick reads and easy characters.

Calling the Swan by Jean Thesman

176 pages | June 1st 2000 | Viking Juvenile | Goodreads summary: There is something not quite right about Skylar Deacon’s family. Something happened three years ago that made them pariahs; that lost Skylar her friends; that keeps all of the Deacons in denial. The tension within the house is so high that Skylar spends most of her time with her older sister Alexandra, who is confined to her room in order to recover from an accident. Skylar dreads her summer English class — she’ll have to deal with new people who don’t know her family’s mysterious history. However, as the teacher, Mrs. Vargas, reads stories and poems aloud, Skylar finds herself pulled from her denial into anger, then through the other stages of grief. It is only then that she can tell her new friends from class the truth: Alexandra was abducted three years ago, and they will probably never see her again. It is her first major step towards letting go — and letting Alexandra’s tangible form stop haunting their home

What I remembered before I reread: I am actually not sure I read this one either. It wasn’t as familiar to me on the reread, either.

Reread thoughts:  The Goodreads description above is different from what’s on the back of the book. I went into the book not knowing what had happened to the family. The back of the book even talks about Skyler’s older sister supporting her. When you’re reading, if you don’t already know from a summary, Skyler still talks to her sister but it’s not difficult to figure out that she isn’t really there. It is weird though, because her little brother talks about seeing her, too.

Skyler has to cope with the loss of her sister and also with the affects of it. Her parents are overprotective and don’t want her to do things like ride the bus or sleep with her window open. She goes to counseling every week with the priest from her church who tries to help her. She is very guarded with kids at school, even those she likes.

It’s an interesting story. Watching Skyler step out and begin to cope is nice. She enjoys her English class and makes new friends. She isn’t sure if she can trust them, but she starts to do more with them and eventually opens up. While the “twist” is easy to see ahead of time, it’s also nice when they finally discuss what actually happened.

I didn’t feel attached to any of the characters, but some of the friends she made were really nice. I’ll be passing this one on and hopefully someone else can love it!

Comments are greatly appreciated and I try to reply to each one! I'm no longer accepting awards, but I appreciate the thought! Cancel reply

I'm Katy! I like to share my opinions about books, sometimes loudly. If you are wondering about my url it's from Tess of the d'Urbervilles!

*blog design under construction and blog posts slow at the moment*